Today, as I was longing for a real tea instead of the prepackaged one you find in store, I suddenly remembered my parents had a Chinese porcelain tea set, certainly brought back by my uncle when he first moved to China. Despite my Chinese auntie's demonstration, nobody knew how to operate it apart from me, so it had been re-purposed as a pretty decoration for our guest room. 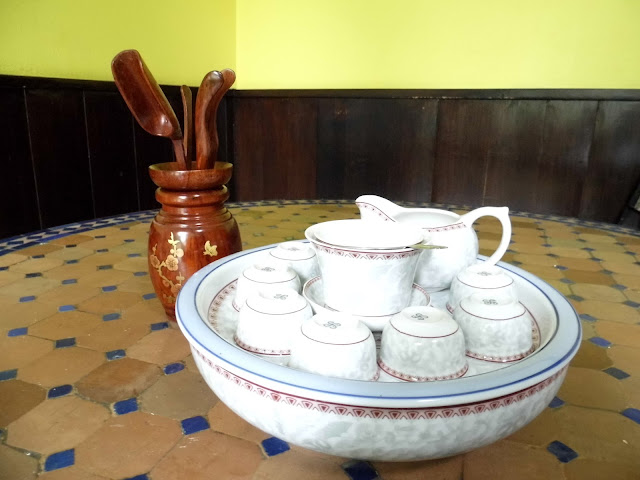 I don't really know what kind of tea set it's supposed to be. Even thought the brewing method is reminiscent of Gong fu cha, it is porcelain and using a Gaiwan instead of Yixing clay teapot. It also doesn't have a high collar cup as for Gung Fu style tasting. It does use the same wooden utensils though. Since this comes from Canton, it may be a local version. Seeing that the porcelain is full of defect and the thing is overall a retail-type product, I'd say it's an "at home" version of traditional tea set, easier to use and more versatile that the clay pot. I like clay pots better, but they're really permeable to tea and you pretty much have to own one for each kind of tea if you don't want it to bother your tasting session. 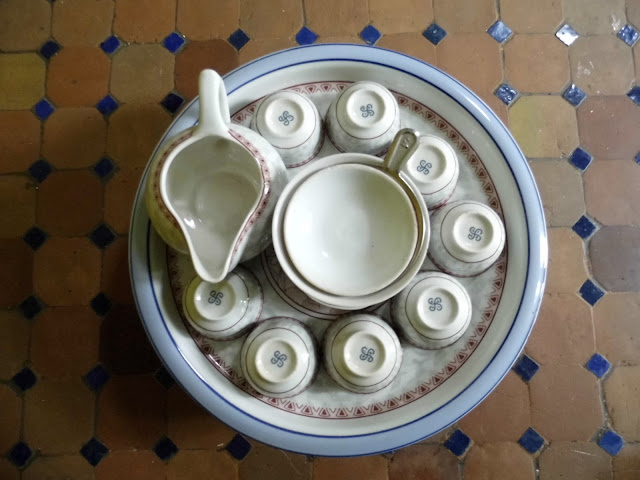 The thing is composed of a gaiwan, the center piece which is a pot with a lid and a saucer. It also have a small tea pot, a strainer and eight little cups. The bottom part is composed of a pierced lid and a large bowl since the brewing method often create an overflow. I used it to prepare a green wulong that I think was a late summer one, because it was pretty heavy and really "sugary", nothing like tart flavor of a spring tea.

As always you're supposed to heat up every part of the set, then make a first infusion to clean the tea before you can drink it.
Watch me mishandle that poor tea set.


As for Gong fu cha, I was able to do several infusion with it on a 2h30 time span. The only problem of that kind of infusion is how the set heat : my finger tips were tender and red after an hour using it. Could've been avoided easily but I'm still not comfortable using the wooden pieces, I find them too slippery. I can manage fine without theme as long as I'm alone, but serving a crowd without them would be incredibly wrong and painful. I guess I should practice a bit to be more graceful, but it's not my absolute priority here.

I missed having a real tea. It was a real treat.
Publié par Unknown à 06:05