Yesterday, my friend Tom and I were going out for my birthday to eat some fondue savoyarde near place Monge (it's just a few street away from le Jardin des Plantes). Moufftard street is quite a toursit-trap but its lovely, I really enjoyed it. The fondue was pretty good by the way, but the wine was awfully expensive, even tought it was a really simple one.
After this heavy lunch we decided to take a little stroll in the neibourghood, and we stumbled across what looked like a traditionnal (and a bit of high-end) chinese restaurant, which was in fact a tea house. Craving for a tea, I decided to give it a try. I have to admit, I love western tea (Damman is my favourite brand at the moment, but each tea house has it's own special blend that I love) but I'm the most unaware when it comes to asian tea. I've tasted a few japanese ones thanks to my friends, and my uncle who works in China gifted me some mandarin flavoured tea (a very curious thing, tea is kept in a dried mandarin so it keep gaining in flavour as it age), but here is all my knowledge. 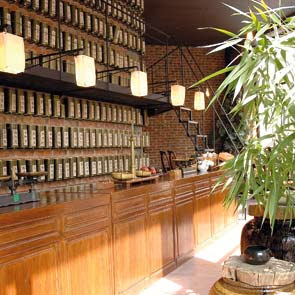 So we rung at the door, and a classy waiter came and opened it. They were three behind the counter, and the place was empty of guest. They were sporting an elegant uniform with black pants and a red mao collared chinese style shirt (it was textured silk I guess). On the shop side was a gigantic wall litteraly covered in chinese tea boxes, all were products of the house. We took place in the tea saloon part, which was furnished with antic chinese furniture, on the wall there was a chinese poem about tea (the waiter offered to show us the translation later), then they ended us the menu. It was entirely made of tea, not a single pastry , and surprise : none of them were blended or flavoured. It was tea and only tea, nothing more than that. Tom and I were totaly lost in this strange menu, but hopefully the waiter was really knowlegeable about tea tasting. He helped us choosing tea for our own taste. Tom, who isn't really fond of tea and doesn't really have a loved type had a really strange tea, which started at first with passion fruit flavor, then turned in a more vegetable-like  taste, with cumcuber tone. I had myself a very strong tea with a coffee flavor at first that swiflty switched to someting  with cereal tone. I should say it again : none of these tea were flavoured in any artificial kind of way, these flavours came from the way and time of drying it ! 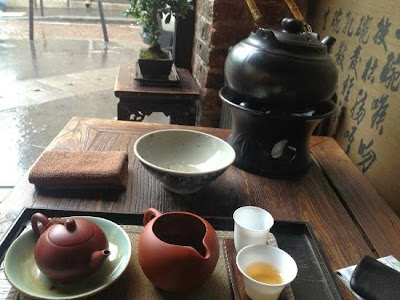 We discovered the chinese way of  tea tasting, which is very different from the western way. Tea is always soaked in boiling water, , they use two tea pots  and two cups, and it bear a least 5 infusions ! I need to try and taste more chinese tea (I'll try to take some photos of my parent's traditionnal china bones porcelain tea set , they really never use it)
I was really pleased by this experience, for that my tea was delicious, the staff was perfectly nice and knowlegeable,  the place was truly stunning.
I was really happy to find this place for my birthday, and I had a really nice day in great part thanks to it !

(please not that none of these photos are mine, I found it by googling the tea house name)
Publié par Unknown à 02:15