Wa lolita : is that possible ?

Edited in June 2015 : added a second outfit and a tutorial video.


A few weeks ago I released on the internet this picture of a style born in hell : wa-lolita. 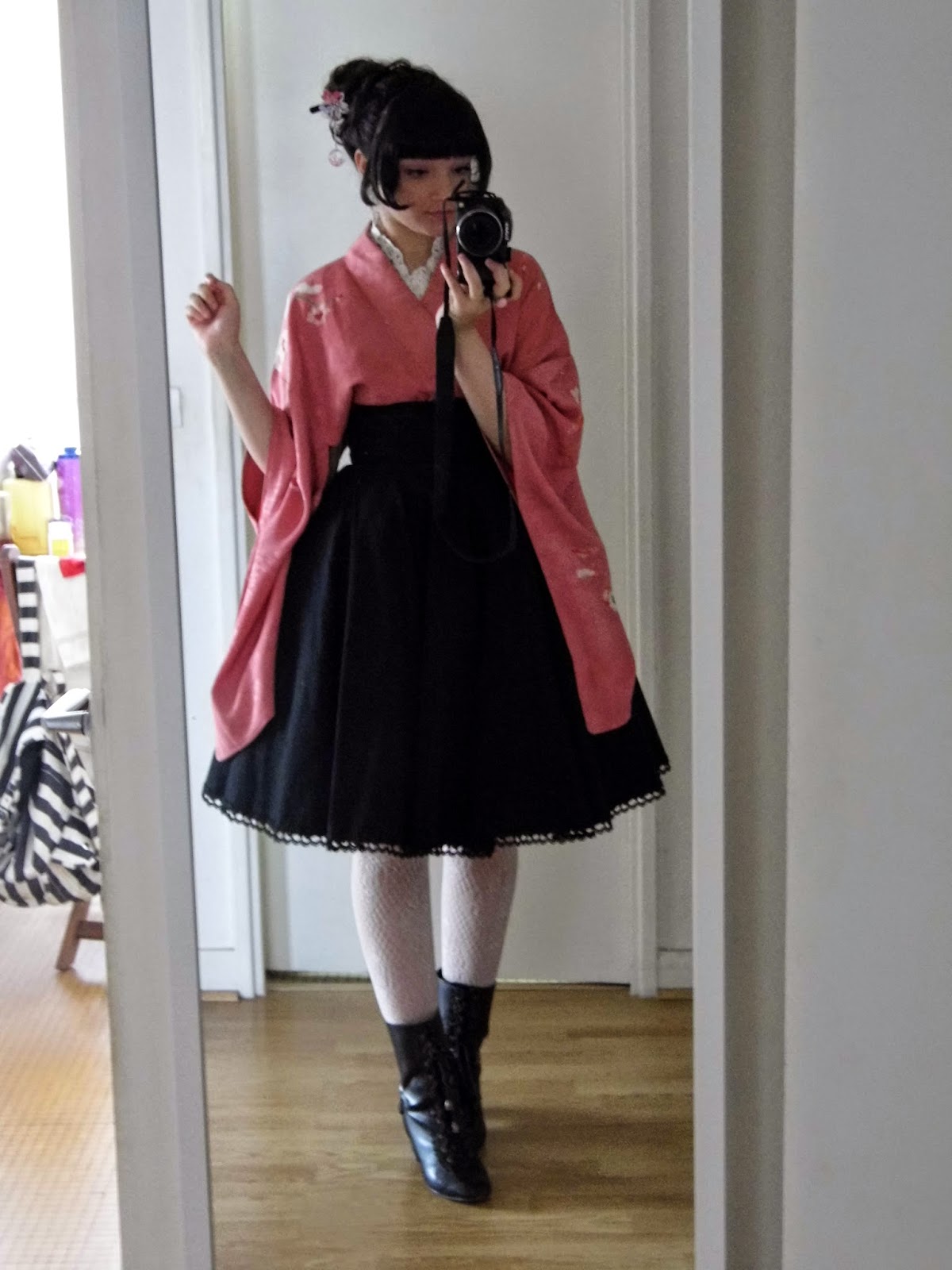 Needless to say that as a lolita, wa-lolita is to me a dreaded term and I was kind of wary of an eventual backlash which never happened

Now as a kimono and alternative fashion lover, I always try to add a twist to my kimono outfit. I have a fond love for hakama style. 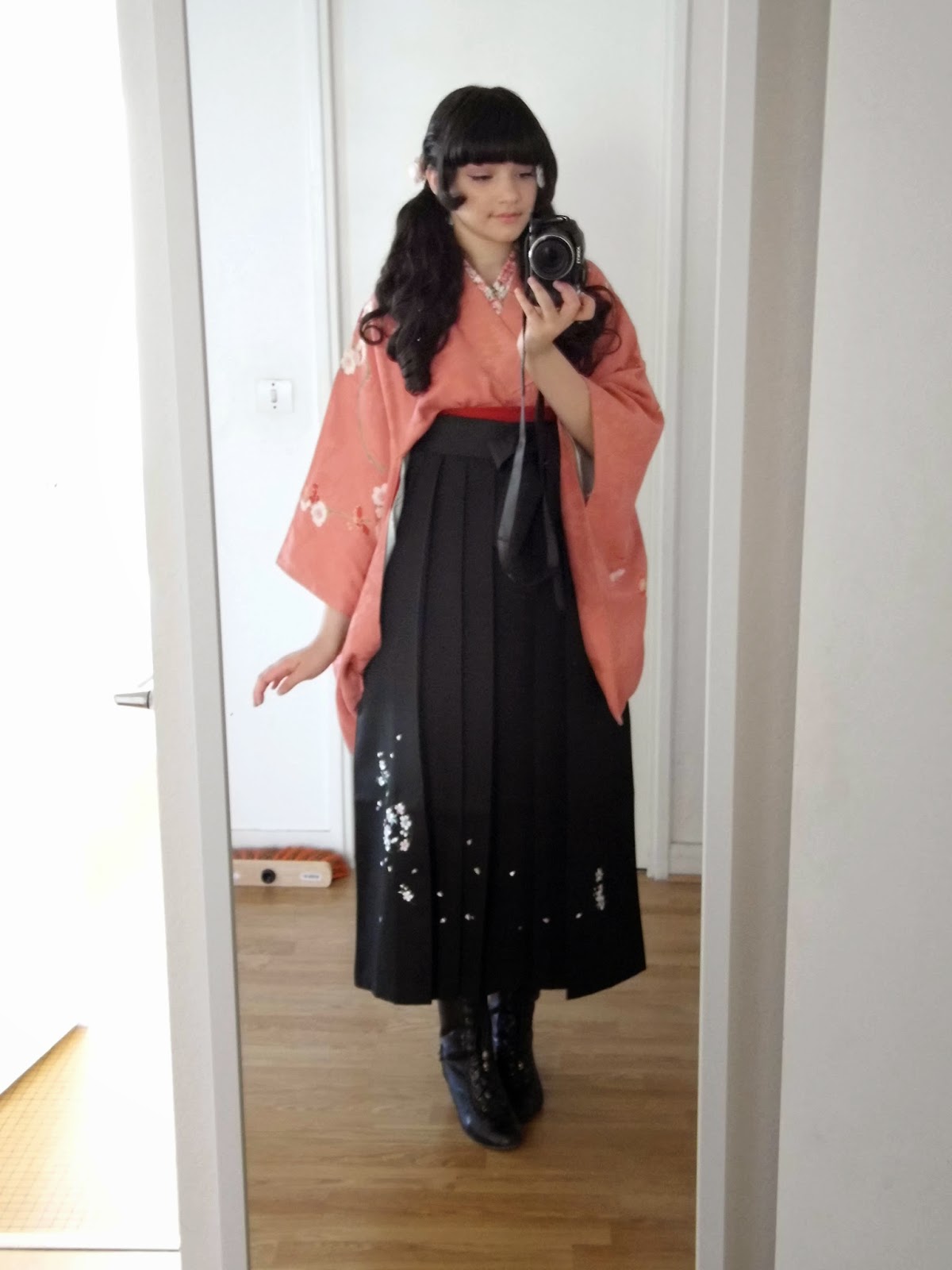 Of course, the pleated hakama look was going to be the easiest way to do wa-lolita. The color blocking part was a bit off for it, but it help conserving a more traditional look and is safer (I only have black skirts anyway).

The big question was then : how can I keep the balance between lolita and wafuku ?
One again the hakama style had the answer. As you can see above, I'm wearing boots with hakama. Longer hakama for more formal occasions are supposed to be worn with zori and tabi (which I dislike, really) but shorter ones are okay with retro looking boots. My Axes Femme boots are a bit of my go-to shoes as a classic lolita. The shoes belonging to both styles, it was perfect for this outfit.

Then the problem of the collar. Under your kimono you're suppose to wear a juban (underkimono) which will only show at the sleeves and collar of your outfit. I choose to suppress it to avoid some supplementary bulk and went the fake collar route. Lace accessories are often worn in modern kimono styling, so a white lace collar and matching lace tighs were my first obvious choice, making the outfit a bit lighter in color.

As for the hair, one is supposed to wear an updo with kimono. I choose to wear a modern kanzashi but one can use flowers matching the kimono pattern or an hat.

Overall I went for a retro style which match my usual classical lolita look, using a nice high waist skirt to avoid the obi problem (obi which is almost hidden in an hakama look anyway).

I made a quick photo tutorial to explain the dressing process (sorry for bad lighting and weird angles, I need to buy a tripod) :

1) You want to use an underdress to protect your kimono from getting body oil and everything.
It's time to do your hair and makeup, choose your legwear and shoes. 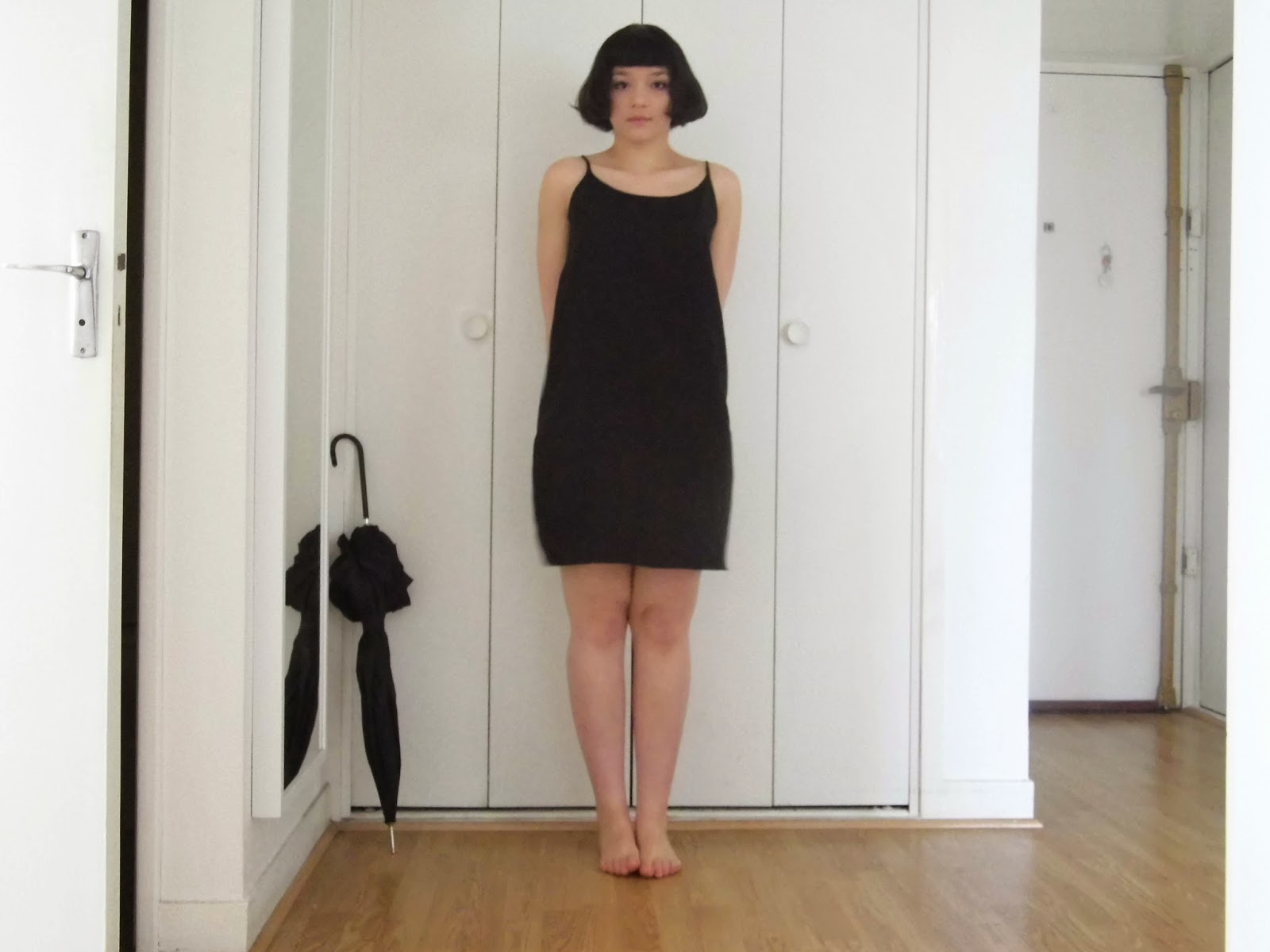 2) Place the fake collar. I use some random lace bobby pinned to my underdress and secured with a koshi-himo (thin silk or gaze belt) 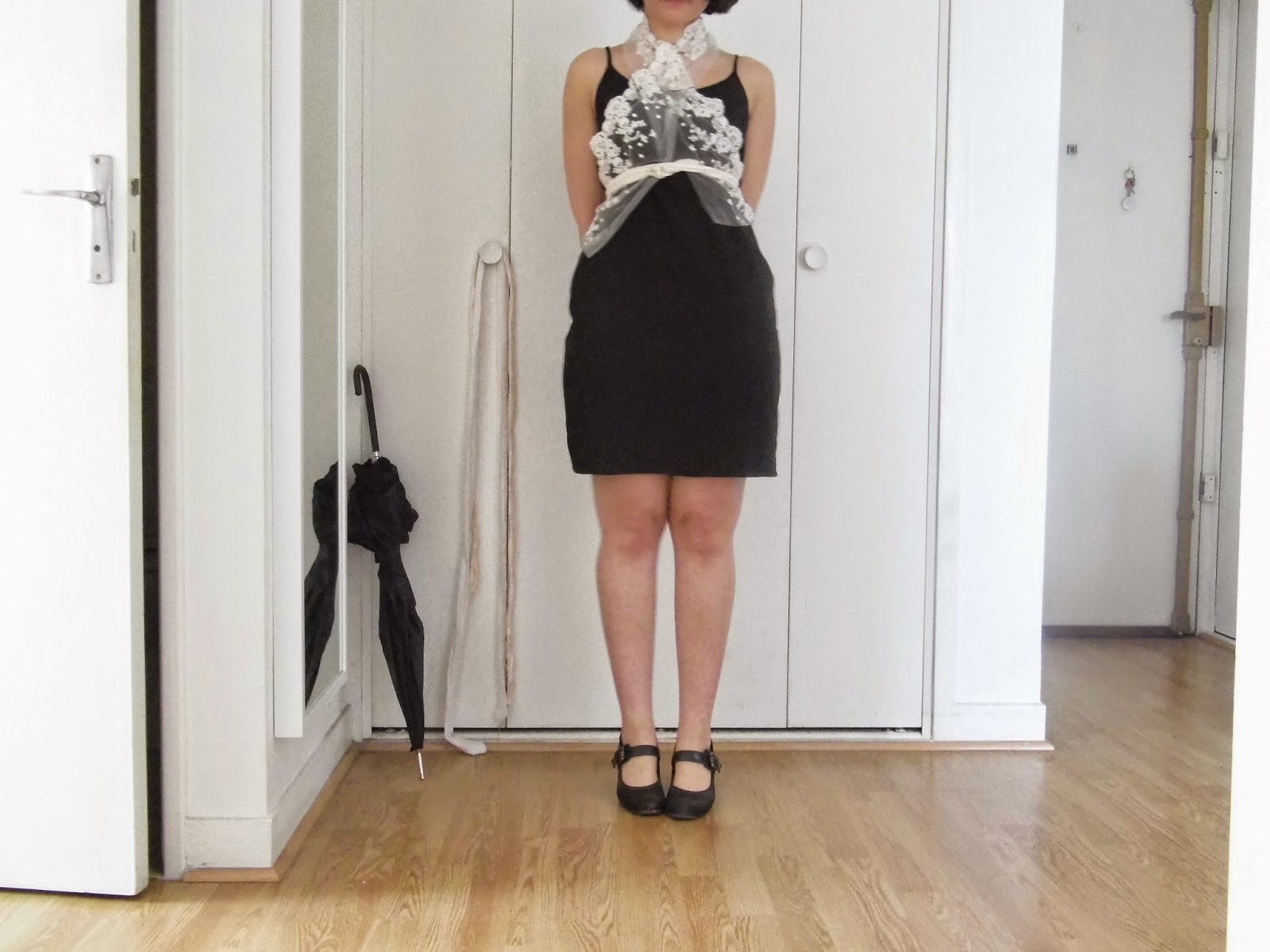 3) Put on your kimono. You can use a yukata or a kimono, I picked this one because it's really thin and easy to fold. The thinner and shorter the best. 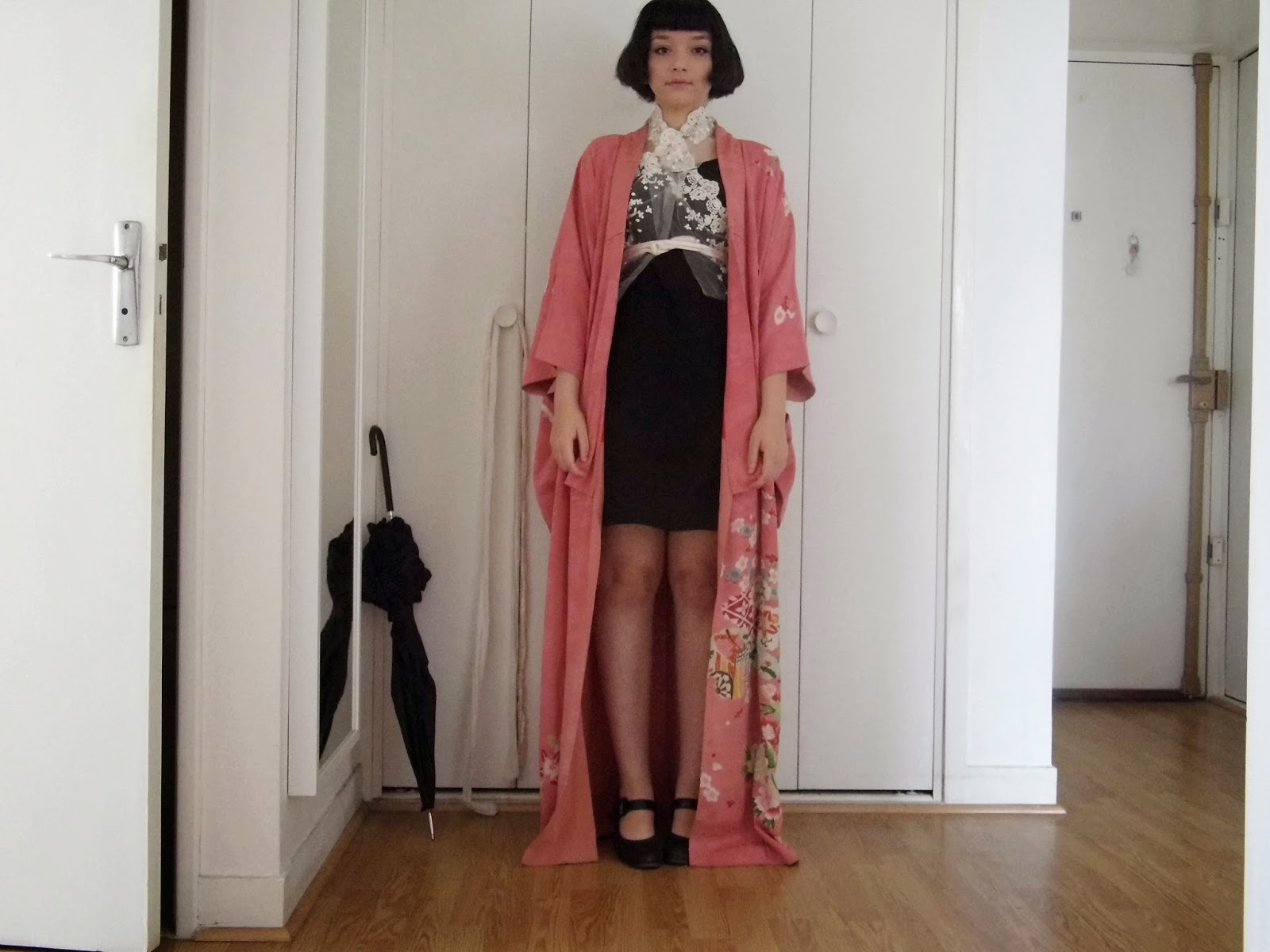 4) Fold the kimono knee-lenght, left over right then secure with another koshi-himo. 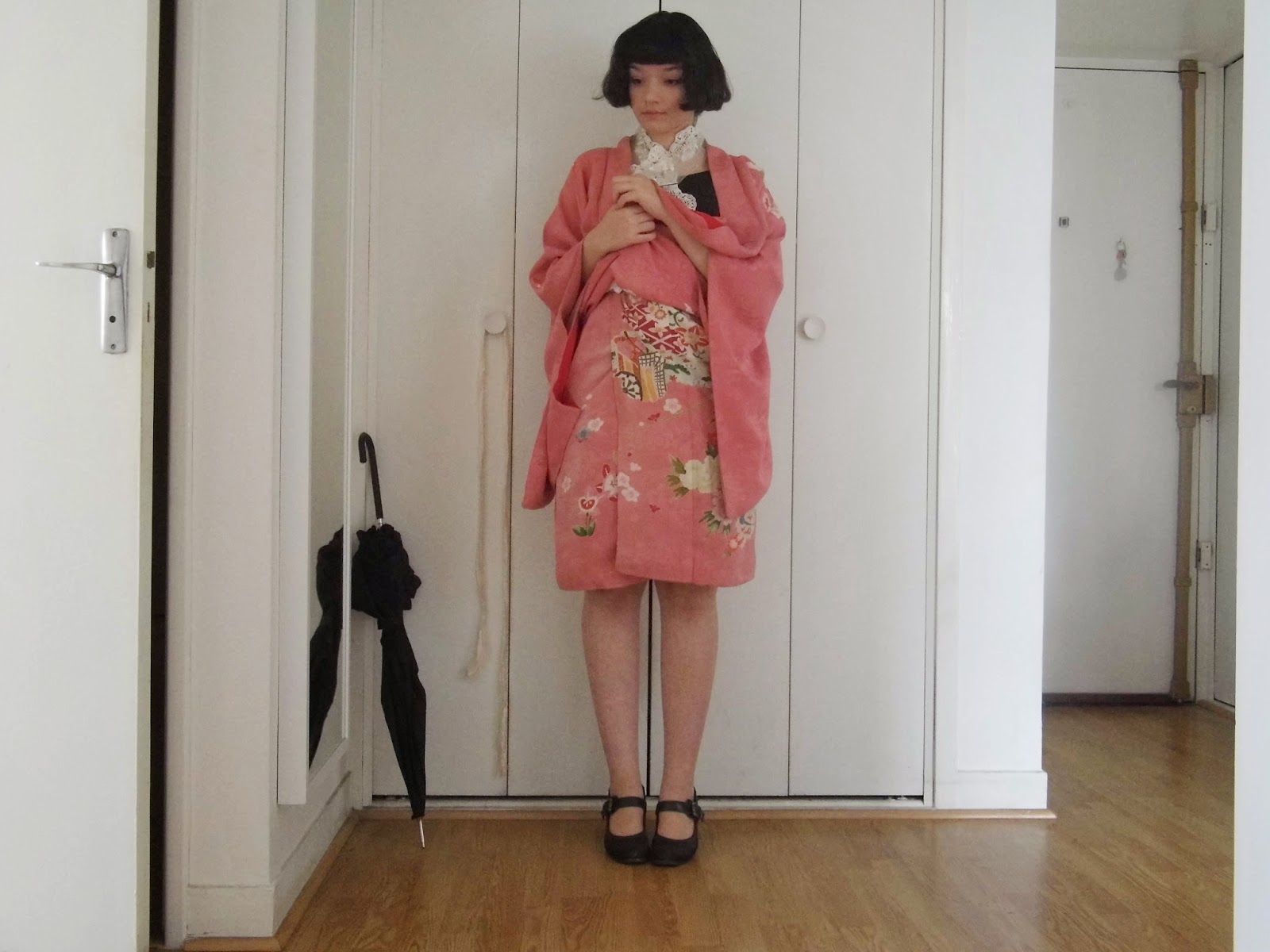 5) Adjust the upper part, close down the collar and tie it with a last belt. You can shorten a bit your kimono as well as pull your collar back a bit. 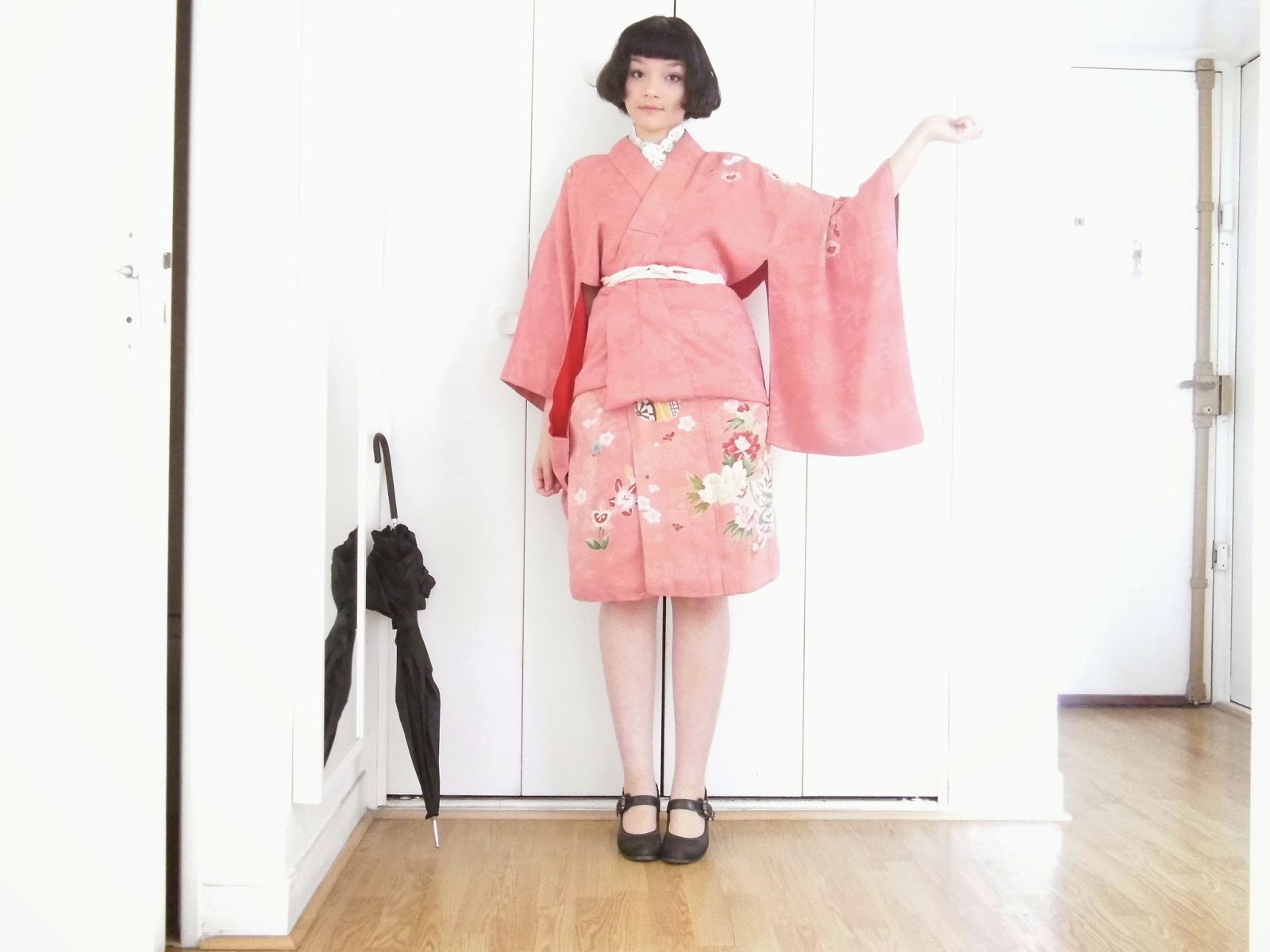 Kimono and lolita do have really different rules on what's acceptable or not. Knowing them before breaking them is a good point !
Kimono color coordination can be tricky and mostly have nothing to do with lolita's view on colors, I think erring of the safe way with being a bit more matchy-matchy than usual in kimono fashion is better.
Traditional kimono patterns may work a lot better for classic and gothic, but colorful yukata fabric are spot on for sweet imo.

Edit :
As I see more and more people linking this post, I'll try my best to up the quality content.  So I though I could present to you the second, more complete version of my wa lolita outfit.

As I guess I'm a bit lazy, I didn't really want to compete on the old school or classic grounds for this winter's big event, so I though about wa lolita. I took my initial idea and changed pretty much everything except the skirt and collar.

For the kimono I chose a chuufurisode (half-lenght sleeves) which is the traditional lenght for hakama wear, and settled with celebratory patters like fans since the event was so fancy. As jewerly is pretty rare in kimono styling, I elected a single ring with carnation flower on it, which is the symbol of traditional japanese beauty.


While the bold orange-pink color of the kimono and the lace accessories are definitely Taishô inspired, the western hat and shoes are really reminiscent from Meiji.
Wearing a hat with this outfit not only balance out the skirt volume but paired with short hair give a much more free, young and careless vibe to the outfit.
For long, it was only men who adopted the western vestry since they had to work in a western environment while the women remaining at home kept wearing their kimono. Such a short hair cut (only worn by children and really young women) topped with a hat makes the look bold and daring in this historically inspired context. 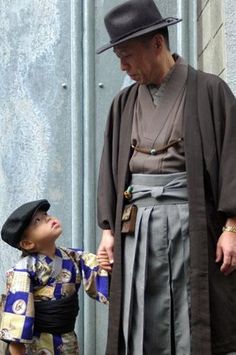 Cue for the shoes, that should have been boots since mary janes are in this context too reminiscent of child clothing to fit in. The striped stockings add a little bit of dynamism to the legs and make a nice, historically accurate accessory.

Generally speaking, as the hakama is most of the time male clothing I like to add more "manly" elements. In regular kimono styling, people tend to try and overshadow the male elements with a lot of makeup, jewelry and curly hair, but I find the outfit much more fun when it goes the funky route. It's still look like a female style without a doubt, but it has a lot more energy and flow than your regular overly padded and straight formal kimono outfit.


And now for the video. This is the video tutorial for kimono folding 101 in wa lolita. As you may have noticed, english is not my first language and I made my best to be audible, so please bear with my obvious discomfort and the wonky phrasing.

That's all for today, I hope you liked it and sorry for the rambling, unedited pictures and everything !
Publié par Unknown à 02:11